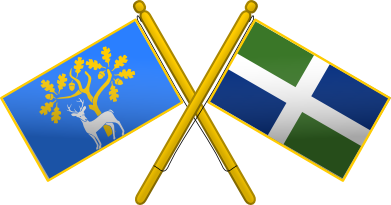 We are campaigning for the establishment of county flags for Berkshire and Oxfordshire. Since the addition of Buckinghamshire’s traditional flag to the UK Flag Registry, the pace of the campaign has increased and the Association of British Counties is now bringing the campaigns for the two flags together.

The Thames both divides and unites the two counties, and their identities are closely knit. In recognition of the special relationship between the two counties, the Association of British Counties proposes a shared voting process to establish a recognised flag for both counties.

Residence in a county is not a prerequisite for a sense of belonging. Indeed where we live now, where we grew up, and where we might hope to live, all influence how we identify with the counties.

The great thing about county flags is that they can be flown in any county and transcend boundaries. Participation in the campaign (and eventual vote) is not restricted to residents of either county.