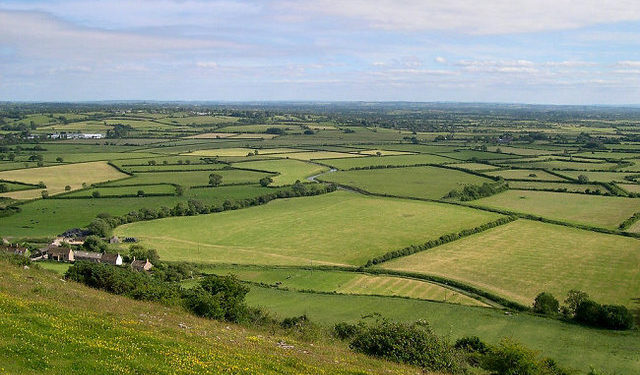 Somerset Day is celebrated on May 11th, commemorating the gathering of his people by King Alfred to battle and defeat the Danes in May 878. In antipication of the day, we present our Map of Somerset and our portrait of the county.

Somerset is a maritime county in the West Country of England. The county is mainly agricultural, with dairy farming, stock raising and market gardening being important. The county is traditionally associated with cider production, and the village of Cheddar, in the Mendip Hills, has given its name to the cheese that was first made there. Tourism is also important to county’s economy. Manufacturing and engineering are significant in the county’s larger towns.

The Somerset coast stretches for 40 miles of the Bristol Channel from the Avon to Exmoor and includes a string of resort towns. Minehead was once a busy commercial port that reinvented itself, from the Edwardian era onwards, as a port for pleasure steamers and as a holiday resort. Butlins Minehead opened in 1962 and is one of the last of the original camps still open. Watchet is a quiet harbour town. Samuel Taylor Coleridge’s poem The Rime of the Ancient Mariner was written whilst travelling through Watchet and the surrounding area.

Burnham-on-Sea claims that its concrete pier, built in 1911-1914, is the shortest pier in Britain. The coming of the railways to Weston-super-Mare in the 19th century changed it from a small village to the major resort it has become. The Grand Pier remains a major attraction. Clevedon’s Pier, opened in 1869, is one of the earliest examples of a Victorian pier still in existence. Clevedon Court (NT) is a 14th-century manor house. Portishead was a fishing port that grew to be a major dockyard and industrial site. Now it is primarily a commuter town for Bristol.

In the north of the county, on the River Avon, lies the jewel that is Bath, a fashionable retreat for Georgian gentry and now a destination for anyone. It is home to the only natural hot springs in Britain, the pungent water pouring forth at a great rate from hidden wells beneath. On this the Romans built their town and others followed. The result of Regency fashion and local stone is one of the most remarkable cities in the kingdom.

Downstream is the mediæval market town of Keynsham and then Bristol, one of the great cities of the realm, split along the old course of the Avon between Somerset and Gloucestershire. Ashton Gate, Bedminster, Brislington, Knowle, Windmill Hill, Totterdown and Whitchurch lie on the Somerset side of the city. Bristol City Football Club traditionally draws its support from this part of the city and from Somerset generally.

To the south-west of Bristol is Nailsea, a town which grew on coal mining and glass manufacture but is now primarily a commuter town. North of the town is Tyntesfield (NT), a Victorian Gothic Revival house.

Axbridge lies on the River Axe, near the southern edge of the Mendips. King John’s Hunting Lodge (NT) is a wool-merchant’s house of around 1460. Frome is built on uneven ground at the eastern end of the Mendips. The town first grew due to the wool and cloth industry; it later diversified into metal-working and printing. It retains a large number of listed buildings. Nunney Castle (EH) is a 14th-century castle to the south-west of Frome. The moated castle’s architectural style was possibly influenced by the design of French castles.

In the heart of the county are the Somerset Levels, a remarkable flat land reaching in from the Bristol Channel, divided in two by the low range of the Polden Hills. The land of the Levels is at or around sea level and in former days was regularly flooded (and some have suggested that Somerset’s gets its name from the reappearance of the land in the summer). The Levels are criss-crossed with “rhines”, drainage ditches, and that many of the villages’ names end in -ey, “-island” tells of life before the Somerset Levels were drained.

One of the most dramatic features of the Levels is Glastonbury Tor, a lone hill rising steeply from the Levels, atop which stands a ruined mediæval chapel. At the foot of the Tor are the ruins of Glastonbury Abbey, around which the town grew from the Early Middle Ages to the Reformation. In 1191 the monks of the abbey alleged they had discovered the tomb of King Arthur and Queen Guinevere in the abbey’s cemetery. Glastonbury has been associated with Arthurian legend ever since. Another popular legend is that the abbey was founded immediately after the Crucifixion by Joseph of Arimathea. The legend has Joseph planting his staff into the ground, which it flowered miraculously into the Glastonbury Thorn.

More historically, King Alfred of Wessex hid in the Levels at Athelney, before bursting forth and defeating the Danes to restore England.

East of the levels lies Wells, home of Bishop of Bath and Wells. It is a small market town with a large cathedral of unique architecture, and a castle. The Bishop’s Palace, adjacent to the cathedral, dates to the 13th-century. The gardens include St Andrew’s Spring from which the city takes its name. The spring supplies St. Andrew’s Well from which water flows into the moat.

East of Wells is Shepton Mallet which lies on the River Sheppey and the Fosse Way. The medieval wool trade gave way to industries such as brewing in the 18th century. The town remains noted for cider production. HM Prison Shepton Mallet was England’s oldest prison still in use prior to its closure in 2013, having opened in 1610.

South of the levels, the market town of Bridgwater is famous for its annual Guy Fawkes illuminated carnival, a spectacular celebration also held in the other towns of Somerset. The Quantock Hills, west of Bridgwater, were England’s first designated Area of Outstanding Natural Beauty.

The south and south-east of Somerset is a quiet rural area. Somerton stands in the centre of this area. The town has held a weekly market since the Middle Ages, and the main square with its market cross is today an attractive location for visitors. Stembridge Tower Mill (NT) in High Ham, north-west of Somerton, is the last remaining thatched windmill in Britain.

Wincanton, in the south-east close to the Dorset border, is home to Wincanton Racecourse, opened in 1966. The nearby market town of Castle Cary lies on the River Cary. Bruton was the site of an Augustinian priory from which only a wall remains. The town is also well-known from the English folk song, The Bramble Briar. Yeovil lies further south, standing hard by the River Yeo, the border with Devon. Nearby is Montacute House, a late Elizabethan three-storey mansion. In the deep south of the county are the quiet towns of Ilminster, Chard and Crewkerne.

Taunton, the county town, in the south-west has over 1,000 years of religious and military history, including a 10th-century monastery. Taunton Castle has origins in the Anglo Saxon period. The town also houses Somerset County Cricket Club’s County Ground. Wellington, a small industrial town to the south-west of Taunton, gave its name to the title of the Dukes of Wellington. To the west of Taunton the county is almost entirely rural, apart from Minehead on the coast. Dunster Castle is a motte and bailey castle long since converted into a country house. The castle stands on the top of a steep hill called the Tor, and has been fortified since the late Anglo-Saxon period.

In the far west of the county, running into Devon, is Exmoor, a high sandstone moor, which was designated as a national park in 1954. The highest point in Somerset is here: Dunkery Beacon standing at 1,703 feet.

There are numerous Iron Age hill forts in Somerset, some of which, like Cadbury Castle and Ham Hill, were later reoccupied in the Early Middle Ages. The Stanton Drew stone circles are believed to be Neolithic.

During the first two centuries of the Saxon conquest, Somerset was a borderland between the Saxons and the Britons. By the early eighth century though King Ine of Wessex had pushed the boundaries of the West Saxon kingdom far enough west to include all of Somerset. The name is first recorded in 1015 as ‘Sumaersaeton’. After the Norman Conquest, the county was divided into 700 fiefs, and large areas were owned by the crown.

The Somerset Flag comprises a red dragon, the traditional emblem of Somerset, on a gold background. The red dragon is derived from the banners borne by Alfred the Great and his kinsmen during the era of the Viking Wars.

More within Featured to the top