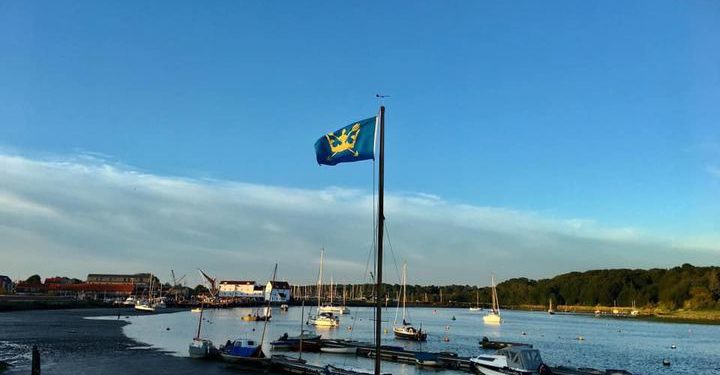 Suffolk Day is celebrated each June 21st, the longest day of the year, chosen to highlight the fact that the county is the most easterly. In celebration we present our Map of Suffolk and our portrait of the county.

Suffolk is a maritime county in East Anglia. Whilst the county is generally low lying it contains a rich variety of landscapes. Suffolk is famous for its exquisitely picturesque villages, featuring in many a painting. The villages abound with broad greens, thatched cottages brightly painted, and that particular East Anglian art, pargeting (shaped plaster). The main industries are agriculture, food processing and tourism, along with the major ports of Felixstowe and Lowestoft and the many racing stables around Newmarket.

Suffolk’s northern border with Norfolk comprises the rivers Waveney and the Little Ouse – which rise within yards of each other before running in opposite directions. The far north-west corner of Suffolk lies in the fenland, long since drained and now a flat agricultural area. On the edge of the fens are the small towns of Mildenhall and Lakenheath. The Mildenhall Treasure, a large hoard of 34 masterpieces of Roman silver tableware, was found at West Row, near Mildenhall in 1942. It is now in the British Museum. North of Lakenheath is Brandon, a small town which crosses the Little Ouse into Norfolk. RAF Lakenheath, between Lakenheath and Brandon, is host to the largest USAF base in the United Kingdom.

To the east of Lakenheath lies another unusual habitat, the gorse-covered sandy heath of Breckland. Covering around 100,000 acres (across both Norfolk and Suffolk), it is an area of considerable interest for its unusual flora and fauna. Prehistoric flint mines have been found in Breckland. At the eastern side of Breckland, the town of Thetford, whose town centre is in Norfolk, has long since crossed the Little Ouse and lies partly in Suffolk.

The west of Suffolk lies on Cretaceous chalk, part of the downland that stretches from Dorset through East Anglia to the the Yorkshire Wolds. The Newmarket Ridge is a ridge of low chalk hills which runs from Bishop’s Stortford in Hertfordshire to Bury St Edmunds in Suffolk. On this ridge at Great Wood Hill, near at Rede, is the highest point in Suffolk (446ft). In the far south-west of the county, in a dip in the chalk hills, is the industrial town of Haverhill, the Essex border running through the south of the town.

The main town in the west of Suffolk is Bury St Edmunds. The town grew up around the Abbey of Bury St Edmunds, once among the richest Benedictine monasteries in England. It became a centre of pilgrimage as the burial place of the Anglo-Saxon martyr-king Saint Edmund, killed by the Danes in 869. The abbey church and most other buildings are now merely rubble cores, though two medieval gatehouses survive, as well as two smaller medieval churches built within the abbey complex. Near to Bury is Ickworth House (NT), a neoclassical country house set amidst extensive parkland. West Stow, north-west of the town, has a reconstructed early Saxon village built on the site of an actual Anglo-Saxon village excavated here.

At the far west of the county is Newmarket, the headquarters of British horseracing. The town, which is almost surrounded by Cambridgeshire, has the largest cluster of training yards in the country, many key horse racing organisations and Newmarket Racecourse itself.

The county’s southern border with Essex is the River Stour. Some of the finest of Suffolk’s villages are found in the Stour valley, “Constable Country”, including Cavendish, Clare, Lavenham and Long Melford. Lavenham’s streets are lined with ancient half-timbered and thatched houses, the plaster painted in bright colours and never a straight line between them. Clare Castle is a mediæval castle ruin perched on a high, round motte in Clare. Bridge Cottage (NT) at Flatford is a pretty 16th-century thatched cottage located in the heart of the Dedham Valley, notable as a location for works by John Constable.

The wetlands of the Broads National Park cover much of the north-east of Suffolk along the final reaches of the River Waveney. The Broads is a network of mostly navigable rivers and lakes, formed by the flooding of peat workings. Oulton Broad, Flixton Decoy Broad, Fritton Decoy, Carlton Marshes and the south side of Breydon Water all lie in the Suffolk part of the Boards. The Waveney flows into the River Yare a mile from the sea and the Yare forms the border with Norfolk before meeting the sea between Gorleston-on-Sea and Great Yarmouth. Close to the point where the rivers meet is Burgh Castle, one of several Roman forts constructed to hold cavalry as a defence against Saxon raids (the Saxon Shore). The fort is roughly rectangular with three of the tall massively built walls still extant.

The Suffolk Coast and Heaths Area of Outstanding Natural Beauty covers 60 miles of the county’s coast. This includes ancient woodland, commercial forestry, the estuaries of the Alde, Blyth, Deben, Orwell and Stour rivers, farmland, salt marsh, heathland, mudflats, reed beds, small towns and villages, shingle beaches and low eroding cliffs. The area includes Dunwich, once a great port and indeed a capital of the Kingdom of East Anglia but now wholly lost to the sea.

At the north end of the Suffolk coast is the Edwardian seaside resort of Gorleston-on-Sea with its sandy “Edwardian Beach”, seaside gardens and Pavilion. To its south is Lowestoft, a port town and a resort with wide, sandy beaches, two piers and a number of other tourist attractions. Here is found the easternmost point of the United Kingdom: Lowestoft Ness, beyond which lies only the sea. The resorts towns of Southwold and Aldeburgh lie on the coast to the south.

The small town of Orford is separated from the coast by Orford Ness, a long, wide shingle spit at the mouth of the Ore, which has grown up over the centuries, carrying the course of the river with it parallel to the coast until the waters can burst out into the North Sea.

The southernmost point of Suffolk is Landguard Point by Felixstowe, a substantial commercial port. It is at this point that the Orwell and Stour estuaries converge. Upriver on the Orwell is Ipswich, a major port since Anglo-Saxon times which remains the county’s largest town. The town has a fine historic core with mediæval and Tudor merchants’ buildings.

Away from the coast, the east of the county is largely rural with several small towns. The pretty market town of Beccles stands on the Waveney, at the western edge of the Broads. Further inland on the Waveney is Bungay with the ruins of the Norman Bungay Castle. To the south of Beccles is the Roman settlement of Halesworth. Saxmundham is a small market town inland from Aldeburgh. To the east of Saxmundham is the market town of Framlington. Framlingham Castle (EH) has a complete curtain wall in an interesting thirteen-sided shape. The market town of Stowmarket lies in the centre of the county.

Woodbridge stands on the southern shore of the River Deben, north-east of Ipswich. With 1,400 years of recorded history, the town has retained a variety of historical architecture. Across the Deben is Sutton Hoo, the site of one of England’s most significant Anglo-Saxon archæological finds. Here, buried within a man-made mound, was found a ship burial containing a rich collection of treasures.

Suffolk (Sudfole, Suthfolc, meaning ‘southern folk’) was formed from the south part of the kingdom of East Anglia, settled by the Angles in the 5th century. The most important Anglo-Saxon settlements were at Sudbury and Ipswich, with strongholds at Eye, Clare, Walton and Framlingham. Suffolk may have only been established as a separate shire not long before the Conquest. The wealth of the Anglo-Saxon kings is indicated in the Sutton Hoo ship burial. The county’s medieval prosperity was based upon the woollen cloth industry and is reflected in the many large village churches such as those at Lavenham, Blythburgh, and Southwold. The Suffolk Flag is a banner of the arms of Saint Edmund which bears two gold arrows passing through a gold crown. Suffolk Day is a huge celebration every 21st June, the longest day of the year, chosen to highlight the fact that the county is the most easterly.

More within Featured to the top