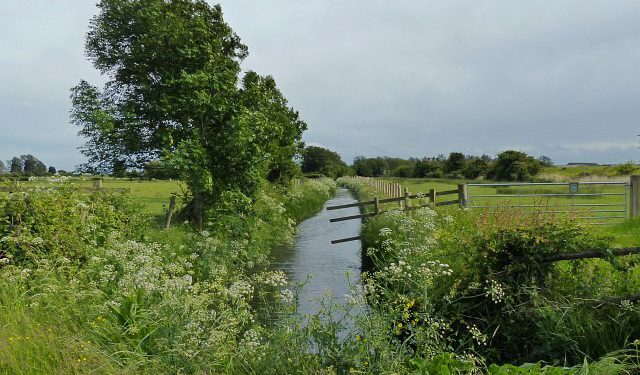 Monmouthshire Day is celebrated on September 25th, the feast day of Saint Cadoc. We present our portrait of the county and a Map of Monmouthshire.

Monmouthshire is a maritime county in south-east Wales. Monmouthshire was once the heart of the Kingdom of Gwent, then the first of the Welsh territories brought directly under Norman control. Some still debate whether it is of England or Wales, though others consider the county motto Utrique Fedelis (“Faithful to Both”) to be the final word. Monmouthshire is noted for its ruined abbeys and ruined castles and its unspoiled views.

The River Wye forms the eastern border with Gloucestershire, the long, rich river entering the Severn south of Chepstow. Chepstow was founded on trade (its name means “market-place” in Old English) but the dominant feature is its Norman castle, for Chepstow Castle, on the Wye, marks the first Norman incursion into Wales.

Further north, where the Wye is met by the River Monnow lies Monmouth, the county town. Monmouth dates back to Roman times. The mediæval 13th-century stone gated bridge over the Monnow is unique in Britain being the only preserved bridge of its design remaining. The Monnow becomes the border with Herefordshire north of here.

Between Chepstow and Monmouth, on the banks of the Wye, lie the ruins of Tintern Abbey. It was founded by Walter de Clare, Lord of Chepstow, in 1131, only the second Cistercian foundation in Britain. Its ruins inspired William Wordsworth’s poem “Lines written a few miles above Tintern Abbey”, Alfred, Lord Tennyson’s poem “Tears, Idle Tears” and more than one painting by J. M. W. Turner.

In the north-east, a limb of the county stretches into the Black Mountains, between Brecknockshire and Herefordshire. Here lies the county’s highest point, Chwarel-y-Fan, on the Brecknockshire border. Here too lies Llanthony Priory, a partly ruined, thoroughly romantic, former Augustinian priory.

Just south of the Black Mountains, at the confluence of the Gavenny and the Usk, lies Abergavenny. Formerly a mediæval walled town, it was originally a Roman fort, Gobannium. It contains the remains of a mediæval stone castle built soon after the Norman conquest.

In the south-east of the county, close to the Severn, lies the small town of Caldicot and north of it the extraordinary village of Caerwent. It was founded by the Romans as the market town of Venta Silurum. The modern village is built around the Roman ruins, which are some of the best-preserved in Europe.

Close to the centre of the vast rural expanse of eastern Monmouthshire lies the town of Usk. The town stands on the River Usk, spanned by an ancient, arched stone bridge. Usk Castle, built by the powerful de Clare family, stands above the town. Usk is noted for its rural setting, tranquil lifestyle and quality of life. Castles abound in the eastern part of the shire. White Castle (Cadw) is a ruined Norman Castle near to Llantilio Crossenny. Raglan Castle (Cadw) is a late mediæval castle just north of the village of Raglan. Along the eastern border lie the ruined Norman castles of Grosmont Castle (Cadw) and Skenfrith Castle (Cadw).

The former coal-mining valleys of the north-west of the county are heavily populated, although there is no longer a working pit in the county. Blaenavon, at the source of the Afon Llwyd, grew around an ironworks opened in 1788. Steelmaking and coal mining followed. The Blaenavon Industrial Landscape is now a UNESCO World Heritage Site. South of Blaenavon the Llwyd flows through Pontypool, an industrial town on the edge of the South Wales coalfield. Further south is Cwmbran, designated a new town in 1949.

The Ebbw River, along with its tributaries the Ebbw Fach and Ebbw Fawr, flows from the very north of the county joining the Usk at its mouth on the Severn estuary. Many of the towns of the area lie alongside it. The former mining and steel town of Ebbw Vale lies at the head of the Ebbw Fach vale. Newbridge is another former mining town built around a “new bridge” over the Ebbw in the 18th century. The town of Risca lies downstream. Close by is Twmbarlwm, the remains of an Iron Age hill fort.

At the top of the Sirhowy valley, built on land leased from the Tredegar Estate, is the town of Tredegar, an early centre of the Industrial Revolution and birthplace of Aneurin Bevan. Further south in the valley is Blackwood, originally founded in the early 19th century as a model village. The modern economy is based on light industrial and high-tech firms.

The City of Newport lies at the mouth of the River Usk. Newport was built around its docks but nowadays has a broad economic base. Newport Transporter Bridge is a Grade I listed building, one of the few remaining in use in the world. West of Newport is Tredegar House (NT), a grand 17th-century Charles II country house mansion that for over five hundred years was home to the Morgan family, later Lords Tredegar.

North of Newport is Caerleon, famous as the site of the Roman legionary fortress of Isca Augusta. Substantial excavated Roman remains can be seen including the thermae (baths), barracks and finest remains of a Roman amphitheatre in Britain.

The Monmouthshire Levels stretch along the north bank of the Severn estuary either side of Newport. They are the result of 2,000 years of human endeavour to reclaim, drain and enclose the land against the recurrent inundations of the Severn. This extraordinary landscape is registered as a Landscape of Outstanding Historic Interest in Wales.

From the 5th to the 10th centuries the Welsh Kingdom of Gwent covered an area roughly similar with what later became Monmouthshire. The area then became part of Morgannwg, and shortly before the Norman conquest had become part of the unified Welsh realm of Gruffydd ap Llywelyn. From the 11th until the 16th centuries, the area which later became Monmouthshire comprised six Marcher lordships – Abergavenny, Caerleon, Chepstow (or Striguil), Gwynllwg (Wentloog), Monmouth and Usk. The Laws in Wales Act 1535 integrated Wales directly into the English legal system. Some Marcher lordships were annexed to existing counties in England and some were annexed to existing counties in Wales, with the remainder being divided up into new counties, one of which was Monmouthshire. Some historians have argued for centuries that the wordings of the Laws in Wales Acts of 1535 and 1542 imply that the new shire of Monmouth was literally to be made a part of England. Other historians have countered that this view is to miss the whole point of the Acts, which was to annex the whole of Wales to England, not just Monmouthshire.

The Monmouthshire Flag, three fleur de lis on a background of blue and black, is based on the arms attributed to Inyr, a 6th century King of Gwent. The arms have a long history of use by the Diocese of Monmouth and by local authorities in the county. Monmouthshire Day is celebrated on September 25th, the feast day of Saint Cadoc.