The flag features a gold lion reguardant (looking backwards) on a black field. This design was attributed as the arms of the ancient Welsh ruler Gwaithfoed and his kingdom of Ceredigion, from which the modern county derives and was incorporated into the arms used by the local council in the top left quadrant. 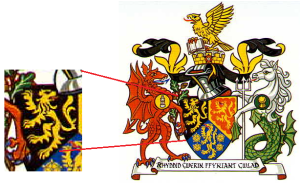 so there are precedents for use of this design to represent the county.

. Such switching of the colours of field and charge in attributed arms is not uncommon in early Welsh heraldry but by the twentieth century, the council’s use of the gold lion on black indicates that this had become the established form and the locally familiar design. This preferred pattern is now used locally, as seen at the Castle Hotel, Aberaeron, in the county in Summer 2014.