The flag of Suffolk is a banner of the traditional arms of Saint Edmund, the county’s patron saint. the Flag Institute agreed to register the design in September 2017, following its display

by Suffolk County Council on the inaugural “Suffolk Day”, June 21st 2017 and a subsequent request for its registration by twenty-one county organisations.

Edmund, the last King of East Anglia, was reportedly murdered by the Danes in the year 870, his traditional arms

reflect his kingship and the manner of his death.

The emblem is found across the county and is much used by organisations across it, including Framlingham College;

Suffolk Institute of Archaeology and History;

he towns of Beccles;

a local branch of the Women’s Institute;

and the local school’s athletic association

who also displays a banner with the device

The device can be found on old county maps

appeared on M.R. James’s 1930 guide to Norfolk and Suffolk

and is much used by Suffolk Scouts

on the day itself, it was seen in use by the Ipswich Building Society

Acknowledging this widespread usage of the Saint Edmund banner, the Flag Institute agreed to register this reworked design 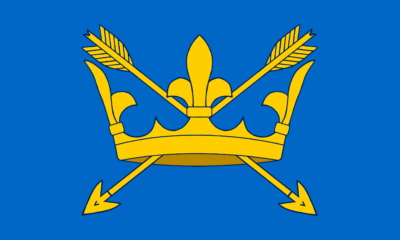