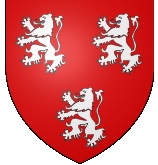 which were later incorporated into the arms of the county council as a chief, arranged on horizontal axis.

This pattern could be incorporated into any potential flag for the county.