This post features a number of proposed flags for the Welsh county of Radnorshire. The flags on here utilise elements found in earlier arms – for a fuller understanding of the background to these designs please see the entry on Radnorshire under the “Proposed Flags from traditional county emblems”

The above flag is a proposal from Philip Tibbetts. An attempt to utilise different local traditions, it features a boar’s head taken from the arms of Cadwgan against a white hoist triangle that resembles the white inescutcheon found on the original Mortimer arms and the yellow and blue Mortimer stripes. This design was devised several years ago and has gained some notoriety. In March 2014 a resident of the county was sufficiently impressed by the design to commission the production of the flag which had hitherto existed only in paper and digital form as a concept 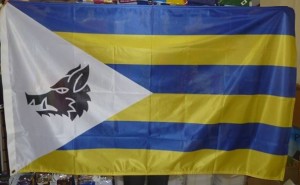 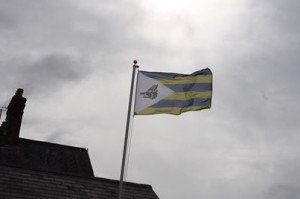 . Its inclusion of the Mortimer colours however has prompted some discussion regarding a preference to use elements from the arms of the native Welsh nobility. Some further attempts at compromise between these various arms follow. From top to bottom are a further proposal from Philip Tibbetts, two from Philip Beddows and two from Leonardo Piccioni;