The proposed flag is the creation of Leonardo Piccioni, who was inspired by various elements used in the arms of local nobility.

These include, the Erskine family, (Earls of Mar and Kellie) 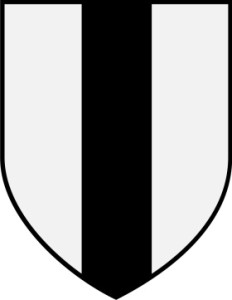 One theory holds that the name Clackmannan is a corruption of the Gaelic ‘Chlach Mhannainn’, which means the Stone of ‘Mannan’ or ‘Manau’ , a sea god from local mythology – Manau was also the ancient name of the district. Another view is that the name derives from a local legend that Robert the Bruce left his gauntlet (mannan) on a rock (clack) in the locality, thus giving the area its name. The gauntlets and saltire in the arms awarded to Clackmannanshire County Council 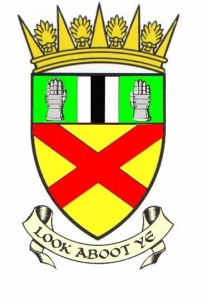 refer to this legend. The green field in the chief, stands for agriculture.

Thus Leonardo’s proposal merges the green, white and black colour scheme found in the chief of the council arms with the saltire and gauntlets to create a flag composed of a white fimbriated black saltire on a green field with the left and right quadrants formed by the saltire each bearing a white gauntlet. The resulting flag is a strong effective, design, clearly exhibiting locally meaningful and resonant themes. The county is also known as Strathdevon, meaning valley of the Devon River which runs through the county and Brady Ells points out that the proposed green, white and black flag of Strathdevon resembles the flag of Devon, also a cross design with the colours of green, white and black!