There is a potential traditional flag for Denbighshire based on the arms of the ancient kingdom of Powys Fadog, see the entry in the section “Proposed flags from traditional county emblems”, however as that is yet another lion banner, this alternative suggestion has been designed by Philip Tibbetts. The design derives from the seventeenth century work, “The Battle of Agincourt” by the poet Michael Drayton, where he describes a banner borne by soldiers from Denbighshire “Those of………Denbigh, a Neptune with his three-fork’d Mace:” which refers of course to a trident, as seen on this flag. The quartered yellow and white background comes from the arms awarded to Denbighshire County Council in 1996 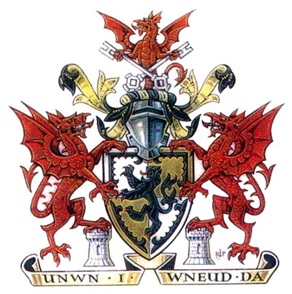 which placed the supposed black lion of Powys Fadog over a quartered yellow and white field, apparently meant to recall the cross used by the local ancient prince, Edwin of Tegeingl – also featured in symbols used by neighbouring Flintshire. The quarters of the field are white in the first and third quarters and yellow in second and third. Although there appears to be no specific reason for this choice of colours, the combination does make for an eye-catching and unusual flag.

Another take on these themes from Paul Lindsay combines the quartered field with the black lion of Powys Fadog and Drayton’s trident.

More within Novel Designs to the top