The proposed flag, identified by Jason Saber, is taken from the arms used by Wigtownshire County Council, where the design used appears as a chief (top section) on the shield 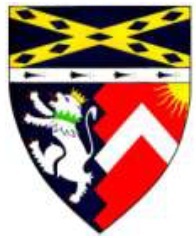 who owned significant territory in the county. While all modern illustrations of the Wigtownshire County Council arms unequivocally display the saltire and diamonds in black it seems plausible that this may have arisen from a mistaken understanding of original line drawings, where colours were indicated by “hatching”, that is a series of specific strokes of a pencil etc. to represent colours, when materials to depict those colours were not available. An intended navy blue colour may have been misinterpreted as black. Notwithstanding this possibly erroneous origin however, the dramatic and unique Wigtownshire arrangement of black and gold, diamonds and saltire makes a fine flag for the county. One may consider for comparison the national flag of Qatar with its unusual shade of maroon, which similarly appeared as an unintended consequence of the sun affecting natural red dyes – the result being a highly distinctive and unusual flag!

More within Novel Designs to the top