Also known locally as “The Mearns”, the proposed flag for the county is inspired by the colours of the arms of the Earls of Kincardine 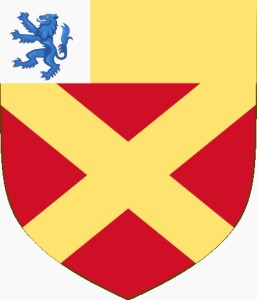 In the canton is a tower to symbolise the ruin of Kincardine Castle, the last trace of the original town and county seat. The sword on the castle is taken from the former civic arms of the county where it recalls the role that the county played in saving the nations crown jewels. The sword and the castle together, symbolise the origin of the name Mearns from the Gealic “A’ Mhaoirne” meaning ‘The Stewartry’; ‘Stewartry’, itself derives from “household guardian” i.e. steward.