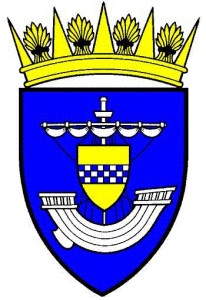 Another proposal from Brady Ells also includes the lymphad vessel from the Renfrewshire County Council coat of arms which is positioned at the top of the flag, in the style of the flag of Jersey. The design    reworks the Stewart checks found in the council arms as a saltire in reference to the national flag of Scotland. These arms feature heavily on the arms of the burghs across the county including;

the Royal Burgh of Renfrew

the Burgh of Paisley,

the Burgh of Gourock,

and the Burgh of Johnstone,