The rather eccentric county of Cromartyshire, comprising 23 separate parcels of land amidst the county of Ross (Ross-shire), is a seventeenth century contrivance formed from the estates of George Mackenzie, sheriff of Cromarty after he gained royal favour. Later ennobled as the Earl of Cromarty, the above armorial banner formed from his arms 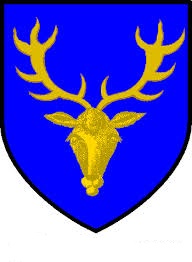 would seem to be the most obvious and appropriate flag to represent this diffused territory, much as the arms of the Earldom of Ross in banner form are proposed as the traditional flag for that county – see the entry on Ross in the “Proposed flags from traditional county emblems” page. This seems a sound notion and certainly makes a very fine flag but unlike Ross and other counties where ancient family arms are no longer used by any individual and can therefore be used to represent the territories where the families were significant in the county’s origins or history, the Mackenzie arms are indeed still the preserve of an individual armiger. They cannot be used to represent Cromartyshire therefore, as an entity in its own right. However the heavily antlered golden stag’s head on a blue field could be the basis of a novel flag for the county. In this proposal from Jason Saber

the basic design is differenced by the addition of a golden border. Aiming to change the very fine basic design as little as possible and thereby to retain the historical association of the stag’s head with the locality, the amendment is slight and the colour of the added element is also that of the stag’s head to preserve the same theme and feel of the original design. The border symbolises the county’s particular geography, being a shire whose constitutent parts are encompassed within the territory of another county.

An alternative design from Leonardo Piccioni

again retains the yellow and blue colour scheme of the Mackenzie arms and cleverly alludes to both the splendid antlers in the original arms of the earldom and the nickname of the Mackenzie clan chief, “caberféidh“, Gaelic for “deer’s antlers” with a knotted saltire, that symbolises crossed antlers. A notable cohesion of an obviously Scottish theme with a resonant local twist!

A third proposal from Philip Tibbetts replaces the blue background of the Mackenzie banner with a black one in reference to the Black Isle upon which the town of Cromarty itself sits and around which the county was formed.