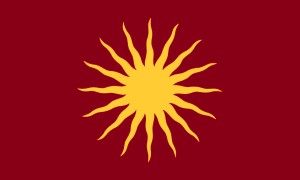 . The juxtaposition of the large central sun represents Midlothian between the other two counties in the Lothian region.

Lothian is a traditional region of southern Scotland which retains a distinct local identity. Through the Dark Ages the territory was the focus of Britain’s early warring factions and was in turn possessed by the Picts and the Anglo-Saxons of Northumbria. Ultimately the territory was absorbed by the Gaelic Scottish kingdom, with 973 generally acknowledged as the point at which Lothian came under Scottish control, when the English King Edgar relinquished control of the land. As late as 1091, however, the Anglo-Saxon Chronicle was still describing how the Scottish king, Malcolm,’went with his army out of Scotland into Lothian’ an indication of its continued recognition as a distinct entity.

The name of the territory may be derived from that of a legendary British King Loth or Lot. Another suggestion is that it is associated with Lugus the Celtic God of Light. But whatever its ultimate origin the evidently Celtic name was used even by English chroniclers and in spite of its occasional rule by the Northumbrians. In this earlier period Lothian described all the land from the southern shore of the Firth of Forth to the modern English border but since this time signifies the territory up to the Lammermuir Hills.

Appearing in the arms of the Earldom of Lothian the symbol of a sun has a long association with the region. As noted one theory holds that the name Lothian may derive from the name of the Celtic God of Light, “Lugus”. The association of the sun symbol with the Lothian region was recognised by its later inclusion in the arms of Midlothian County Council and again in the arms of Lothian Regional Council This symbol, rare in British heraldry and certainly unseen on the flags of its counties and regions, is distinctly representative of the region of Lothian and a unique charge. There could therefore be no better device to appear on Lothian’s flag than its traditional sun. Additionally the emblem of the blazing orb is eye catching and powerful.

A rich maroon hue is often found in Lothian. It features as the school colours of the celebrated local educational establishment “George Watson’s college”. Indeed the college’s website http://www.gwc.org.uk/cms/our-school/ features maroon coloured headers and text in profusion. A maroon and gold colour scheme is also deployed by Lothian buses These colours already serve therefore as something of a local livery and this arrangement is found in no other county flag and very few flags generally. It further makes an attractive and striking combination. The proposed regional Lothian flag thus uses a familiar local colour scheme that is vibrant, distinctive yet traditional and in addition is a unique design among British flags.