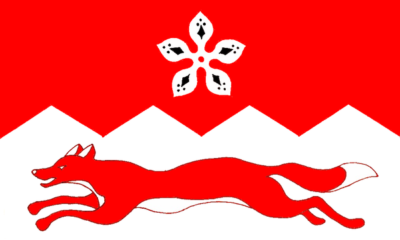 One of only three English counties without a registered flag, the above fox and cinquefoil design is now being promoted by a group in the county including a Facebook page here

The design features several elements or charges long associated with the county, reflecting a rich symbolic history; namely, a red and white serrated or zigzag division, a five petal floral symbol termed a cinquefoil and a running fox.

The red and white divided field was a pattern borne by the de Montfort earls of Leicester, whose family emanated from Normandy. Simon(the younger) de Montfort is ascribed arms in the heraldic roll (Roll temp. Henry III) with a shield with a white and red indented division.

As the de Montfort family also used a white lion a red shield, it seems that this older set of arms was used to represent the office, the earldom of Leicester. The environs of Hinckley came to be strongly associated with this design being termed the “Arms of Honour of Hinckley” and it today forms part of the badge of Hinckley AFC

The De Montforts also married into the De Beaumont (De Bellomont) family, who bore arms depicting an ermine cinquefoil against a red field

A tile bearing a cinquefoil is also amongst the designs located at the 14th century Saint Mary de Castro church in Leicester.

The red and white and zigzag division and the ermine cinquefoil are all found in the arms of Leicestershire County Council.

and the proposed flag retains this traditional pattern but in the horizontal depiction found on the council’s arms.

Leicestershire is also closely associated with a  fox, it is the crest of the council’s arms

and is deployed as  a modern logo

Originally marking the county’s status as the home of organised hunting, the device is now proudly and widely used to symbolise Leicestershire itself, superseding the original reference.

Local bodies using a fox include the county ambulance service

, which, pointedly, is named “Leicestershire Foxes”

the emblem of the county police force

and the insignia of the county’s Amateur Swimming Association

The combination of fox and cinquefoil on the flag thus continues a recognised county theme, in a simply constructed and locally meaningful design. 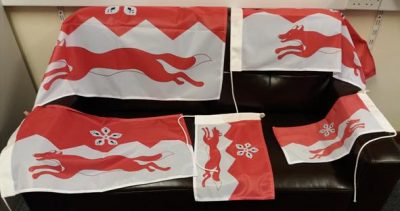 The flag is seen here with a local military re-enactment group. 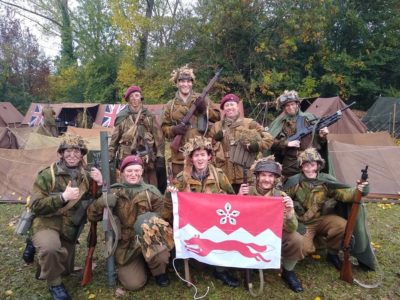 The flag is promoted here https://www.facebook.com/LeicestershireFlag/